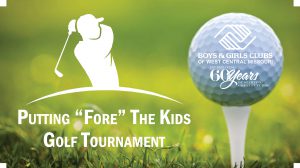 Putting “Fore” The Kids Golf Tournament is a premier golf outing for area golfers of all abilities that features a day on the links for a great cause!

The ninth annual Putting “Fore” The Kids tournament, presented by McCarthy Toyota of Sedalia, was held June 13, 2022 at the Sedalia Country Club. More than $23,000 was raised for Club operations! Photos of the teams can be seen here.