Despite the threat of rain, Boys & Girls Clubs of West Central Missouri had a great turnout at the sixth annual Putting “Fore” The Kids Golf Tournament, presented by Tyson, held September 21 at Royal Oaks Golf Course. The event brought 17 golf teams out for a day on the links for a great cause and raised $11,672 for local children’s programs.

“We are so thankful, and grateful, to all the teams who played this year,” said Special Events Director Andrea Smith. “The rain fortunately held off and everyone was able to get in a full day of golfing fun at the tournament. The money raised will go toward enriching programs that more than 550 children take part in every day at Boys & Girls Club.” 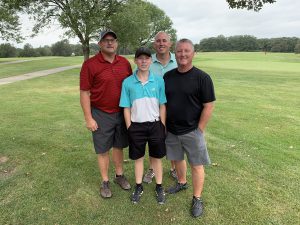 Roger Austin, Marc Mateja, Eric Mateja and Keaton Mateja shot a 64 and won the B Flight.